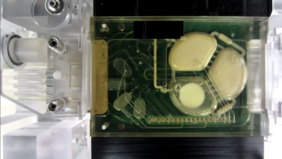 What can you do if you are stranded in a remote location, or –say- on a different planet, and you need a medicine? The idea of some researchers at MIT is easy: Do It Yourself!

In an article on Nature Communications the researchers presented a portable device to manufacture a broad range of bio-pharmaceuticals using "programmable" yeast.

The yeast strain can be genetically modified to produce a wide range of proteins that in turns form the bases of the desired drug. The yeast, Pichia Pastoris, was chosen because it can rapidly reach high density feeding on simple carbon sources.

The researchers have shown the production of recombinant human growth hormone by having the yeast process the estrogen ß-estradiol. The same yeast processing methanol produced protein interferon.
The device is in practice a scaffold for having yeast strain processing a variety of basic components transforming them, on demand, in a specific substance.  This is what is already being done in industrial pharmaceutical processes. The big difference here is the possibility of creating these substances at single doses and in remote locations.

What I found fascinating is the way engineers are now "programming" biological matter, such as yeast, to meet their goals. The idea of programming a living being was unthinkable just twenty years ago.