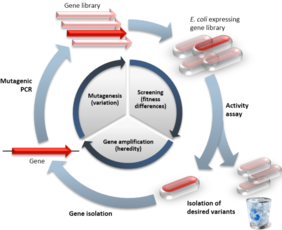 An example of directed evolution with comparison to natural evolution. The inner cycle indicates the 3 stages of the directed evolution cycle with the natural process being mimicked in parentheses. The outer circle demonstrates steps a typical experiment. The red symbols indicate functional variants, the pale symbols indicate variants with reduced function. Credit: Thomas Shafee CC 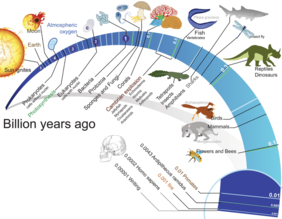 The timeline of evolution, carbon based. Credit: hcrowder

In the early 1990ies, that is in the last century!, Caltech chemical professor Frances Arnold (at that time a researcher) proposed a method to steer evolution, aptly called "directed evolution". Frances is the first woman to win the Millennium Technology Prize (2016).

The idea was to mess up with Nature's results and explore new ways to make those results evolving in a specific direction. So it was not just about speeding up the evolution process (that is random and requires natural selection to take a particular path), rather to steer it in a desired direction.

That (controversial) idea, some 25 years later, has become a reality. Her research team at Caltech has succeeded in modifying a protein taken from a bacteria to create carbon-silicon bond. These bonds do not exist in Nature, they were possible only through artificial chemistry.

Now the team has demonstrated the possibility to have biologic entities manufacturing these bonds. According to the article they published this process is more environmental friendly and should be cheaper than today's chemical manufacturing.

The team is comparing their work to the breeding of horses to create an exceptional one. First you need to recognise the ones that have a "potential" and then you need to cultivate that potential to obtain what you want after a few generations.

They found such a potential in a bacterial protein, cytochrome c, that had the capability of forming silicon-carbon bonds and mutated the DNA part of the bacteria gene that produces that protein. Iterating this mutation they managed to obtain a protein that is 15 times more effective than existing chemical processed used by industry to create silicon-carbon bonds. This is obtained without having to use precious metals and toxic compounds required in the synthetic process, hence without requiring a process to get rid of them (which adds a significant cost to the manufacturing).

The resulting bacteria is the first life form (at least as far as we know) that has silicon-carbon bonds. Silicon is more abundant on the Earth than carbon and one wonders why Nature has disregarded it through the 4 billion years of evolution. Silicon is more stable than carbon and this might be the reason. Random changes in silicon based compounds are less likely to occur, hence evolution would have been much slower. It took almost 2 billion years to move from the first cells without a nucleus (prokaryotes) to the first cells with a nucleus (eukaryotes) and a further billion year to see the first bacteria. Even a tiny slow down in the evolution speed would mean we wouldn't be here to discuss it, and we won't be here for several more billion years....

Yet, with directed evolution scientists can make the evolution clock tick faster. The big question mark, of course, is to understand where this evolution might bring us....