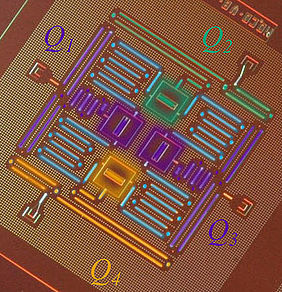 Quantum computers are a reality from a scientific point of view but are far from there from a technical and engineering point of view: in other word we know how they work, what we can do with them but we have not been able, so far, to build one that really works.

There have been implementations of quantum computers, like D-Wave, but not everybody has accepted them as the real thing.

The problem with quantum computer is the fleeting existence of their state.

When you use a classical computer, a von Neumann machine, you know that there is a value stored in a memory or in the processing unit and you know that you can access it at your own pace (almost). In quantum computer the technology we have is not able, yet, to guarantee this kind of stability. Quantum information is fragile and it suffer from interference with many things, like temperature, fields, atomic level defects in materials ... This is know as the problem of decoherence that manifests itself in bit-flipping (a bit changes its value) and phase-flip (contributing to the assessment of the quantum state).

Researchers at IBM have been able to create a circuit that can at the same time detect both bit-flip and phase-flip. Up until now it was only possible to detect one or the other.

Even better the circuit can scale, that is support more than the 4 QBits it is supporting today. A good step forward but we are not there ... yet.