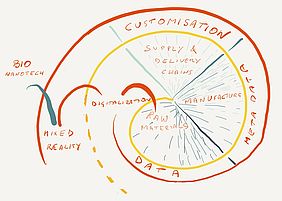 The evolution of the data economy towards the mixed reality

The Data Economy is now growing, and it will likely take a full decade to see it mature. The same happened with the industrial revolution that took some hundred + years to really have an impact and displace the agricultural economy, and with the bit economy that took some 30+ years to have an impact and displace (in part) the industrial economy.  So the 10 years that I am suggesting for its maturation may actually be an underestimate, but we have seen an acceleration in the penetration of new waves, so it might indeed become mature by the next decade. Actually, this accelerating rate change is in itself a characteristics of this new wave.

At the same time, the industrial economy will keep going (as the agricultural economy is still around) as well as the bit economy. The impact anyhow will be felt and it will lead to changes in several areas.

In particular I feel that an evolution will see a stronger integration of the data economy with the industrial economy, leading to "mixed reality".

Mixed Reality is used today, mostly, to indicate the space in between the physical reality (an object/ambient made of atoms) and the virtual reality (an object/ambient made of bits). The transition from one to the other sees an increased percentage of bits with a corresponding decreasing percentage of atoms in a continuum that sees physical reality morphing into augmented reality and on to augmented virtuality  to finally reach virtual reality.

With Mixed Reality I means something more, along the lines of the World Economic Forum vision of the Fourth Industrial Revolution:

This upcoming fourth Industrial Revolution is already here, although in few niches and it is characterised by the blurring boundaries of bits, atoms and bio.

In these posts I am often touching on some of these aspects, and the fact that I am closely following the nanotech (atoms), virtual (bits) and bioengineering/synthetic biology is an indication of what I feel is steering the future.

As sensors are becoming not "embedded" but a characteristics of the material (smart materials) and DNA computation and re-engineering is moving from theory to labs, as robots are no longer tools but morph into the ambient and bioengineering creates seamless prosthetics and exoskeletons and, even more, reprogram DNA we are blurring the boundaries we have been used for millennia and those, more recent, that we built ourselves.

This is affecting the business at a radical level because it is also affecting the values of our societies. It goes beyond technology and it will be challenging us at many levels.