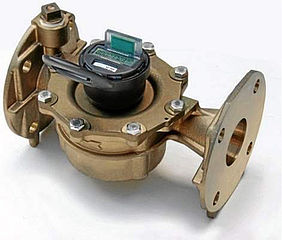 To make operation and maintenance easier (cheaper) the general trend is to progressively connect the various parts of an infrastructure to the internet to be able to monitor and affect the operation.  This is where Internet of Things get deployed.

Take the city of Long Beach, Ca. California is suffering from a long period of drought and regulations are enforced to limit the use of water. In Long Beach the Water Department (LBWD) is asking its customers to irrigate lawns for a max of 10 minutes twice a week. Apparently out of 90,000 customers only 2,000 are not complaining with this regulation.

After considering a variety of solutions to enforce the regulation they have decided to install smart water meters (at the cost of 300$ each) that signal the usage of water by connecting to the Internet.

This provides accurate data on the usage of water and this information can be used by citizens globally and singularly.

Globally it becomes possible to create awareness on the supply and demand of water, singularly it can provide awareness on what is going on.

It can even be used as an alarm signals: if you are not home and water is being used this can raise a red flag a you can be notified on your cell phone. Apps can evaluate the way the water is being used and can tell you if the washing machine is working properly or not.

Sensors are also being deployed in many areas to detect soil humidity and these data can be analysed to take decision on watering the lawn, also taking into account weather forscast for the area.

This is clearly just an example. More and more sensors are deployed and generate data that are used for specific needs (and these needs are the ones that prompted the deployment of sensors) but at the same time these data become a potential value that can be exploited for quite different goals.

The city of Los Angeles has deployed thousands of magnetic road sensors to help controlling 4,500 red lights in the city and has been able to decrease traffic jams by 16% in 2014.

The city of Porto has deployed wifi hot spots onto 600+ buses used in the city public transportation system. This is not just providing Internet access to passengers, it is also providing information on the use of internet and therefore on people using the public transportation, when a person gets on the bus and when it gets off, if she connects to a different line and so on. A living map of people movement on public transport.

The city of Santander, Spain, has deployed over 12,000 sensors measuring anything from the use of parking space to the number of people walking on a sidewalk to the filling of waste baskets.

Interestingly, Chicago, US, is probably the first city that is deploying sensors to collect data having the goal to make these data available to third parties to develop applications. They are placing sensor, to start with, on lamp poles in the central area (Michigan Ave).