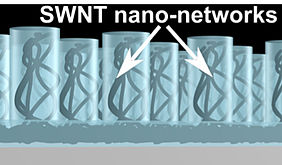 Carbon nanotubes are very good conductor but... they are pretty short, just a few µm max. Hence to create a circuit you would need many of them and most importantly they should be aligned to make contact. Unfortunately this is not easy.

I posted a news just the other day saying that researchers have found a way to use this random scattering of nano tubes as a way to create a secure identification, but what is good for that application (randomness) is not good at all if you plan to use nanotubes for carrying electrons from A to B!

A very good use of carbon nanotubes would be in photovoltaic panels, since nanotubes are good to capture photons and react to that by mobilising electrons. Now, researchers at the Umeä University in Sweden have found a way to scatter the nanotubes that increases their overall conductivity, a million times better than randomly scattered nanotubes.

An important side effect is that with this method one can use significantly less nanotubes, hundred times less according to the researches, to sustain an equivalent flow of electrons at a much lower cost, since nanotubes are still pretty expensive.

To obtain semi-ordered nanotubes the researchers have developed a polymer matrix at nanoscale. Depositing nanotubes on this matrix forces them to assume a quasi ordered structure.

It is not ready for mass production but according to the team who invented the method progress in this area is so fast that mass production might be just around the corner.