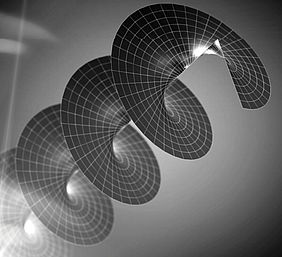 A rendering of an electromagnetic beam, radio or light, with orbital angular momentum. Credit: Anatomy Blue

I pointed out in previous posts that 5G is not to be seen as a (4+1)G, in the same way that 4G was a (3+1)G … The fact is that as we moved from nG to (n+1)G we radically changed the modulation scheme of the radio signal and that led to an improvement in the spectrum efficiency. We have reached, basically, the physical limits of spectrum efficiency (the Shannon limit) with the modulation used with 4G (64-QAM). We can further push the envelop (in a way circumventing the Shannon limit) by using different transmitters and receivers (MIMO – Multiple Input Multiple Output) and indeed we do that although there are physical limitation to the number of antennas that we can use (both on the receiver and the transmitter devices) and we do this both in 3G and 4G.

So for 5G we are not, so far, planning any new modulation scheme but we aim at increasing the bandwidth by using more spectrum, including radio bands that are not particularly good for radio communications (like 50GHz) but that can work out at short distances and having the devices to hop from one band to another as need arise.

There is however an alternative modulation scheme that would lead to a significant increase in bandwidth, like MIMO does but using a completely different approach: the one based on Orbital Angular Momentum – OAM.

I first stepped on this in a night in June 2011 when I was in Venice at the Future Centre. That night, prof. Tamburini from Padua University, along with a Swedish colleague painted with light the message “Signal Received” on the front  of a house in San Marco square. The message was sent from an island in front of San Marco square, some 500 m away.

The message was sent using OAM.

Back in 1996 physicists discovered that light can not just be polarized, it can also be twisted like a corkscrew, showing an orbital angular momentum. This discovery led prof Tamburini to speculate that OAM could be used to transmit an unlimited number of data, each stream using a specific “worm” of the “corkscrew” (remember light does not interfere, interference is an issue of the receiving device that cannot distinguish one signal stream from the other). He demonstrated with the Venice experiment that it is possible to develop a receiver that can separate incoming data streams modulated with different OAM.

However, the creation of radio beams with the desired OAM characteristics was cumbersome, as it was the construction of the antennas needed to intercept the different OAM.

Now  a nice paper on Spectrum analyses the OAM and reports on the significant progress made in these last few years, including the development of flat antennas that can intercept different OAM coding.  This opens up the practical possibility of using OAM as a modulation system (for radio waves and more).

We are not there yet, but it shows a concrete possibility for a new modulation scheme that might be used, in the next decade, for 5G, or -more likely- for 6G. If that would come to pass then we could end up with a new radio system that has a new modulation scheme, as it happened in the transition from one generation to the next in the past. The big hurdle is being able to design an antenna that can create and support OAM and fit in a handheld device.