Cooling down that chip at nano-level 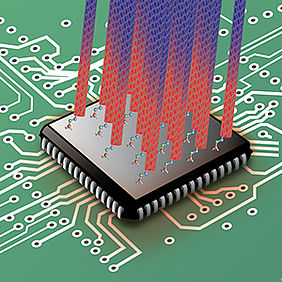 Cooling microprocessor chips through the combination of carbon nanotubes and organic molecules as bonding agents is a promising technique for maintaining the performance levels of densely packed, high-speed transistors in the future (credit: Berkeley Lab)

As transistor shrinks, chips become more and more dense and in spite of the lower powering and increased efficiency the heat that needs to be dissipated increases.

Researchers at the Lawrence Berkeley National Laboratory have found a way to create a strong covalent bond between carbon nano cube and metallic surfaces.This has allowed them to create a "forest" of carbon nanotubes on the surface of the chip and has resulted in a 6 fold increase of heat dissipation. The bonding is crucial to the effectiveness of the dissipation. The resistance at the bonding can be measured as a distance the heat has to travel, the longer the distance the less dissipation. In previous bonding of nanotube on a metal surface that resistance was equivalent, at best, at 40µm. With the new technique the researchers have been able to reduce that distance to 7µm.

As with any research result the way to an industrial exploitation is not straightforward: when I defined the result as a "forest" I was referring to the number of nanutubes, as depicted in the figure, but actually many of those "trees" did not connect well to the metal surface of the chip. Hence they did not help in the heat dissipation. Actually, in a way they "decreased" the dissipation. It were only the nanotubes that have formed a strong bonding with the metal surface that provided such a good heat dissipation.
Hence, the researchers are now trying to perfect the process so that all the nanotubes can dissipate.

The work is interesting because of the furthering of density on a chip that it will support and because it is fighting against the second law of thermodynamics, the ultimate physical barriers that will stop evolution of electronics, according to the famous paper of Lloyd: Ultimate physical limits to computation.