Controlling your heart beats with optogenetics 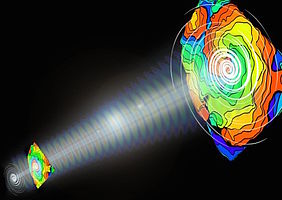 Optogenetics, a new branch of science studying the use of light to interact with cells, has been applied so far to interact with neurones. You first condition a neurone by attaching a protein that is sensitive to light and then you use light to activate that protein leading to a chain reaction that stimulate the neurone to do (or not do) specific activities.

Now a team of researchers from Oxford and Stony Brook universities have found a way to use optogenetics to finely control the electrical signals that make the heart beat.

So far doctors have had the possibility of starting/stopping the heart electrical activity by using an electrical stimulator, a pacemaker, or drugs (beta-blockers). These methods cannot steer the direction of the electrical wave that stimulates the various muscle fibres to contract.

The current methods of heart beat regulation, pacemaker and beta-blockers, are not effective in these situation. Hence the importance of this discovery.

The scientists using gene therapy have modified heart cells to embed a molecule of channelrhodopsin (rhodopsin is the molecule in our retina's cells that capture light) and have shown that by using a computer to regulate a light beam hitting the cells they can reshape the electrical wave to propagate in a correct way.

This work has taken place in a lab, not on a beating heart in a human being so it will take several more years to move into human trials and then into medical practice. However, the door has been opened and scientists are confident that progress in genetic therapy and in electronics miniaturisation will lead to feasible practice in the next decade.