Connecting the brain with fibres as thin as hair 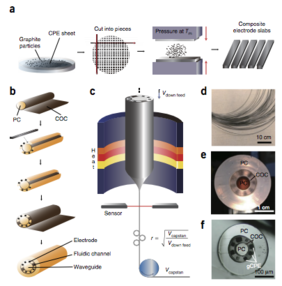 The exploration of a living brain has made significant progress in the last ten years thanks to optogenetics, a set of technologies that makes neurones sensitive to light (through genetic manipulation by inserting a virus into the neurone) light the neurones and detect their electrical activity (see video clip for a better explanation).

So far experiments have been carried out on animals, mice in particular, and this is fine since "brains are brains" and understanding the machinery of one brings knowledge to understand all the others. Clearly there are differences and researchers would love to peer inside human brains as well.

A prerequisite is a significant improvement in optogenetics, in its technologies.

One step in this direction has been announced by MIT RLE (Research Laboratory of Electronics). Researchers have created a probe, thinner than a hair, that can be inserted in a brain with minimal side effect.

The probe contains 2 microfluidic channels to inject viruses to carry opsin to condition the neurones to respond to light, an optical waveguide to illuminate the neurones and six electrodes to detect neurones electrical activity.  The probe is so thin (200µm) and light (0.5g) that several of them can be inserted in a mice brain without compromising the brain activity. This allows researchers to monitor various parts of the brain in parallel. Additionally, the probe is made with biocompatible materials, polyethylene with graphite flacks,  so it can remain in the brain for quite some time with no adverse reaction.

If you have 20 minutes to spare take a look at the second video clip. It shows the convergence of may technologies to help us understand the brain. It looks like science fiction, but it is ... just science!

We are on track with the forecast of 2020 being the decade of the brain.