Citizens as one of the Smart City soft infrastructure 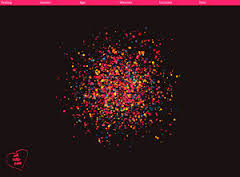 Floating corianders to represent the emotions of people captured in the webspace... Credit: We feel fine

I have discussed few posts ago on the existence for any city (and I claimed that all cities are one way or another smart cities) of hard and soft infrastructures. The former include the road system, the water pipes and the sewer system, the power grid … The latter include the logistics, the regulatory framework, the education systems and so on.

My claim is that technology is giving rise to a social framework that is becoming a powerful soft infrastructure. This is the fall out of the individual generation and sharing of information, that in turns are dealt as data to be mined. Notice that people, individual person, produce information since this is related to each of them, i.e. it is subjective. Differently form the data produced by sensors that are “objective” (they might not be accurate, but that is another story).
A person will “notice” aspects of the environment, or share thoughts that are meaningful to her, not necessarily to others. By supporting the sharing of this individual information the city creates huge amount of data that in turns can be mined, analyzed and converted into information.

Tweets, Whatsapp messages,“We feel fine” and posts are examples of the information to data direction. Augmented reality is an example of data to information direction as are the apps developed in the 3cixty framework.

I claim that one of the most significant characterization our grandkids will associate to the evolution of smart cities occurring in these decades will be the seamless interplay of soft and hard infrastructures and the emergence of the citizens as city “operators” through the soft infrastructure that all together they will form.