Cities are attraction points because they create wealth 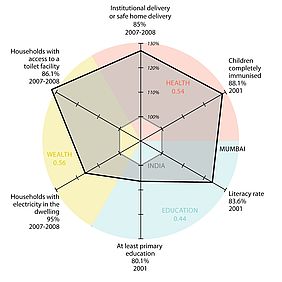 Comparison of liveability of Mumbai vs the one of Hong Kong (inner surface). This is one of the over 100 comparison graphs available from LSE Cities, link in the post. Credit: LSE Cities website

I have posted few months ago some considerations on the relationship existing between the pro-capita wealth of a city and its dimension. On the average we can see a strong resemblance to the relation existing between the methabolic rate of an animal and its size (the Kleiber law). Whereas in the case of animals this relation is rooted in the way the heat generated by methabolic activity is dissipated by the animal, and in turns this is achieved through fractal dissipation, in the case of cities the wealth seems to be related to the cities infrastructures and these again have a fractal topology deriving from the way we engineer them to optimise cost and performances (which is not very differnt from the way natural evolution has progressed, hence the similarities).

Notice that a rural environment does not have a fractal infrastructures, the wealth produced irradiates from the point of production (a farmer selling eggs to those happen to pass by). This lack of efficiency induced by infrastructures is what makes countryside normally "poorer" than the urban environment and in turns what makes cities attraction points for peasants.

Another way of looking at the pro-capita wealth in a city vs its overall dimension is to use this relation as an indicator of the effectiveness of the city infrastructure.

An interesting question is if new technology (and new infrastructures) can radically change the relation between city size and pro-capita wealth (unlikely) or can increase the pro-capita wealth faster (more likely).  My speculation that a change in the relation between pro-capita wealth and city size is unlikely stems from the fact that a city showing such an improved ratio will attract more people that in turn will decrease the ratio. On the other hand we can imagine that new infrastructures may allow a faster increase of pro-capita wealth (in natural evolution this would equate a species that can get bigger because of a more effective way to dissipate the increased methabolic rate).

My take is that this is becoming possibile with a new sort of infrastructures, those based on bits, rather than on atoms. We have already seen a few examples fueled by the decreased transaction costs that characterize economic transactions based on bits. These new infrastructures are more connected to the "happiness of citizens" than the so called hard infrastructures that are serving the needs of the lower layers of the Maslow pyramid.