Charging dream ...does not come true, yet 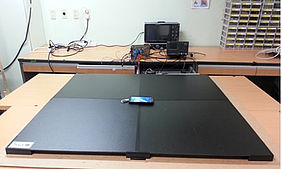 The more we get hooked on wireless devices, cell phone, tablets, watches, ereaders... the more we dream of a way to have them recharged seamlessly. Eternal power, that all we demand.

We have been told by scientists that there is plenty of radiation energy up in the air, it is just a matter of grabbing it. It is called scavenging and indeed we have now a number of devices that benefit from this unending source of power.  Many ambient sensors are now powered via scavenging.

Unfortunately our everyday darlings, cell phones, tablets,... require much more power than what we can harvest from the ambient today.

It is a problem of coupling the device with the potential source of power, normally an electromagnetic field; we like these fields because it is easy to transfer a field from one place to another, what you need is an antenna.

And here lies the problem. Antennas can capture efficiently a field provided they have been correctly designed and manufactured. And there is no silver bullet. For any specific field (having a given frequency) you need a very specific antenna. If the antenna is not exactly fitting the field it can still pick up a bit of it but just a bit and as the antenna specs and the field characteristics diverge the harvesting efficiency plummets.

Hence it is nice to see that researchers at KAIST have been able to develop antennas (they call them dipole, but still antennas are) that can transfer power wirelessly in very efficient way.

The first antenna looks like a flat pane (see photo) and it is used to emit an electromagnetic field having very specific characteristics and a second antenna, much smaller to fit on out portable devices, that can harvest the power of the field very effectively.

The coupling of the two antennas remains effective even if the geometric relation of the transmitting and receiving antenna changes (they speak about six degrees of spatial freedom, meaning the two rotations on each of the three axes).

There are a few induction mats on the market, trials are running at Starbucks, but none so far can effectively recharge a device that is not in contact with it.

Researchers at KAIST have adopted a resonance technique (previously demonstrated at MIT and TILAB among others) and perfected it.  Take a look at the clip.

Industries all over the world is busy in trying to exploit wireless charging, as shown by the Alliance for Wireless Power and Power Matters Alliance that on June 1st announced their merge to increase the critical mass in research and industrial effort to make wireless charging a reality.