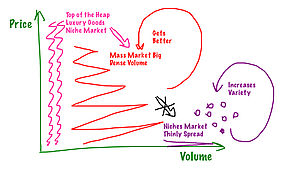 A broad market segmentation to highlight the difference in innovation cycles

It is now time to look at the other force creating abundance, that is the emerging of consumer choices. Notice that the existence of technology alternatives is mostly hidden to the consumer, how many consumers know about alternative technologies for television screens?

What we have seen in this last 10 years is the explosion of choices, particularly in the area of Apps, for the consumer. Actually, it is not a surprise that the explosion is most visible in Apps, because at the root of this explosion in the offer is the low transaction cost required. Apps are not alone: we are seeing a tremendous increase in offer in goods as diverse as fabric for wallpaper or pret-a-porter dresses, and again this is powered by low transaction cost (in manufacturing and distribution). In the case of Apps, manufacturing cost is usually very low (with some exception like creating a complex game) and distribution cost is basically zero.

Hence, the explosion in the number of producers, many of them very young kids, some bound to become entrepreneurs.

As shown in the figure we can roughly divide the market into three broad segments: luxury goods serving a market niche where price is not an issue, mass market products where the affordability is such that a wide audience can be reached and have to be engaged to compensate for the product’s cost, and niches markets where (usually) only very low price can win and that are normally thinly spread. Dense market decrease distribution cost, thinly spread markets tend to increase distribution cost, unless the unitary cost of distribution is zero, which append to be the case for Apps.

It is interesting to notice that a product targeted to a luxury niche may drift into the mass market if the underlying cost decreases as production volume increases and, of course, if there is a potential mass market. And indeed this is what happens and has been shown in the previous post in relation to the evolution of television screens.

However, a mass market product cannot drift into thinly spread niches, mostly because the sophistication of the mass market is based on high infrastructural cost that becomes affordable through volume sale.

Whilst in the mass market the success of a product leads to more focussed investment and produces a refinement of the product, new releases, better smart phones, better iPads…., in the long tail the success generates copycats and increases diversity.

Now this is not something that occurs in the long tail only, we have seen how the success of the iPad has generated tens of copycats but these are relatively few (because of the high cost involved in producing them and the need for significant sale volume to recoup the investment) and are relatively similar to one another. In the Apps space a successful App (Angry Birds) generates hundreds of similar yet quite different apps. These do not create copycat products, rather the idea at the core of that successful App is reinterpreted in many different ways creating diversity in the market.

Again, though, we are seeing the shift of paradigm, from technology push to market pull. But here the market pull acts on millions of players who are confronted with very low transaction cost and very fast delivery options. The innovation is continuous, chaotic and … surprising!