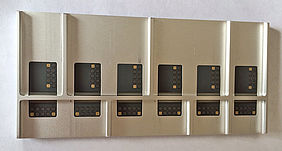 Google’s Project Ara modular smartphone project starts with an aluminum endoskeleton, roughly the size of an average smartphone, with eight slots for hardware modules. The endoskeleton can send or receive data or power through an onboard network. Credit: Google

I have been talking about the evolution of hardware and software relation, and we have been used to talk about Open (Source) Software for over fifteen years (the Open Software Initiative came to life in 1998. The advantage of Open Software is that anybody can reuse the existing software as a starting point for increasing its capabilities by developing more software that can connect, augment, the existing one. This has fuelled significant evolution in the last fifteen years and has greatly reduced the cost (an estimate by the Standish Group in 2008 indicates a saving of 60B$ a year to consumers as result of Open Software).

Now we are starting to see advocates for Open Hardware, and this might well be another characterisation of Industry 4.0.

Motorola thought of the possibility to create a cell phone that could be composed like a Lego, using components from third parties. When Motorola was bought by Google (and retained)the idea moved into a project, dubbed Ara from the name of one of the person leading it. Ara is now carried out by over a dozen companies involving a hundred of researchers. There have been a number of attempts to create modular systems in the past but none really succeeded because of economy of scale and the continuous change in design that would not allow sufficient stability.

Now, according to Google, there is a slowing down in conventional hw evolution for cell phones and the cost for chips went down significantly along with their size, thus providing more "manoeuvring" to assemblage.

Clearly, Ara is focussing on a very tiny segment of hardware, cell phones, and more specifically low class cell phones, those whose design (size) is basically stable and that would benefit from a step by step sale, with a basic version at low cost that could be improved over time by better camera, a new radio protocol, a new screen and so on.

What about other kinds of products? This is actually where Industry 4.0 could make the difference. By using 3D printing one can imagine that customisation can step up a notch or two and that will, in turns, steer manufacturers towards producing open hardware. We'll see.