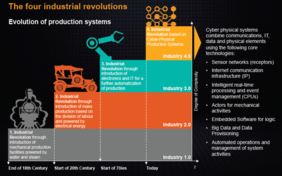 The radical difference between what is extremely costly and complex and what is relatively simple and cheap creates on one side very few big players and on the other side a multitude of small players.

ICT has entered first in localised manufacturing, e.g. numerical controlled lathes which evolved into robots, then in the digital interaction among various players in the supply chain (the first dramatic example was the design of the Boeing 777 aircraft that was completely created with CAD CAM systems involving hundreds of players).

A few companies have opened their manufacturing processes to third parties, including end customers, to let them design customised products. 3Dtuning, <http://www.3dtuning.com> as an example, let car fans to design customised cars using existing parts and providing tools to make sure that they can fit.

The increasing availability of affordable 3D printers (in March 2014 the price has dropped below 2,000$) seems to indicate the possibility of having manufacturing at home (remember the fridge?).

This disseminated manufacturing, that might eventually involve manufacturing at home, is now called Industry 4.0 and it is the focus of research and innovation. The EIT ICT Labs is starting a High Impact Initiative in this area using as a starting point the excellence in manufacturing in France, Germany and Italy with the objective of contributing to the paradigm shift from Industry 3.0 to Industry 4.0.