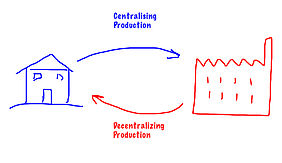 Well, when I was young, and that, unfortunately was long long time ago, I saw “icemen” walking in my neighbour shouting “giacé, giacé” (the Piedmontese word for “ice” - at that time in Turin the local dialect was spoken, with very little Italian on the side…). And at that time, buying a block of ice seemed not just natural but also as the only way to get ice.

Then the fridges came, first a luxury for a few, then more and more common till they became a constant presence in our homes. We moved from a centralised production of ice through costly manufacturing plants to home production. And it happened in just a few decades. I still remember when my parents, after lengthy consultation with my grandparents, decided to buy a fridge. It was pretty expensive, 6 months of salary for an average white collar employee, as my parents were.

So it happened already, why can’t it happen again?

Well, the situation is a tad more complicated.

About that same time, it was usual to produce “agnolotti” (a typical Piedmontese pasta filled with meat) at home. You mixed flour with eggs, prepared the meat cooking it in wine with celery and carrots, make it simmer -I am giving away the recipe, for free!- and then you stuffed the layers of pasta.

In a few decades the art of home made agnolotti has basically disappeared. Nowadays you get them at the supermarket, and you can choose from tens of different fillings and flavours.

If we want to look at the (potential) paradigm shift towards industry 4.0 and beyond we need to understand what it is driving this shift and how it is going to have an impact.