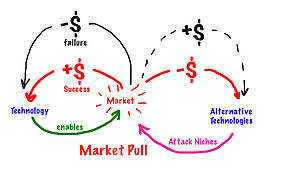 The market success of a technology decreases the chances for an alternative one, and conversely the penetration of an alternative in a market niche may disrupt the whole market.

2. The interplay of alternatives

Let's consider SED, Surface-conduction Electron-emitter Display. This technology was the result of researches carried out by a number of Japanese companies (mostly Canon and Toshiba, Sony focussed more on a similar technology, FED: Field Emission Display), aiming at providing better displays than the ones possibile with LCD. Indeed SED (that can be seen as micro CRT, Cathode Ray Tubes) provided much better contrast, a wider viewing angle and better colour than an equivalent LCD.

However, SED in the early years of the last decade was competing with LCD that were successful on the market. Because of their success, and the fact that the industrial production of SED required more investment before hitting the market, companies kept investing on, and bettering, the LCD production process. The market was putting pressure on the availability of flat screens and LCD production was the only way to satisfy demands.
This led to an increase in LCD performance, a further decrease in their cost and resulted in less investment in SED that eventually lost their chance without having the opportunity to compete in the market.

The investment available in the various companies was routed to the LCD (that kept getting better) and less and less investment was made available to better the SED. That widened the gap between the two, resulting in the abandoning of the SED technology (Canon dropped its SED effort in 2010).

Hence, it is the market, not the technology performance per se, that eventually determines the evolution of technology. This is what is meant by "market pull". Successful innovation steers research investment and creates a self fulfilling prophecy.

It should be noted that a new technology (new in the sense of just trying to attack another technology entrenched in the market) has an uphill fight since it is competing with a technology that, being on the market, has already won the market heart: displacing a technology already on the market requires a much better one. An equivalent one is unlikely to overcome market (consumers') inertia.

"Better" means offering better performances, lower cost, higher usability. Of these three the lower cost is usually the most difficult to win, since any new technology does not have the efficiency deriving from finely tuned production, achievable only through cycles of improvements.

Hence, any new technology will have to try to win the market by addressing niches where performance or usability is more valuable than price. In other words it has to capture specific interests.