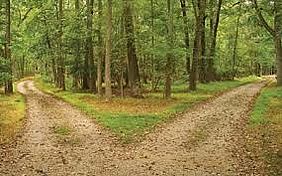 Two paths ahead. Can I really decide which one to take or is my choice just a figment of my imagination? New experiments are providing food for thoughts on the millennia old debate on free will

Of course I can! I have free will, I am writing it just because I want to do it.
The debate on free will (let alone its implication on God...) has raged through philosophers for at least two thousands years (and more). Till few years ago the debate had little scientific ground, although the best minds thought it over and over.
For something to be part of science it has to be possible to prove it differently (challenged) through experiment.

In the last decades, and particularly in this one, we have more and more tools that let us peer inside the brain and observe what is going on and the sequences of events.  If something happens "after" something else we have to accept the fact that what happened after cannot have conditioned what happened before. Interestingly this principle is what led Einstein to the theory of relativity for which there were two mathematical consistent solutions and he chose the one that did not contradict this principle. Curiously, also in the theory of (special) relativity we can have a phenomena that can appear to happen before or after another depending on the observer velocity.
Well, it turns out, from several experiments, the last of which performed by two researchers at the department of psychology at Yale whose results have been published in an article on Psychological Science, that our minds rationalise decision part of our brain has already taken giving us the impression of having consciously taken that decision (i.e. using free will).

They asked a number of volunteers to predict what white circle, out of 5 of them, would turn red and once one actually turned red the volunteer had to declare whether his prediction was right or wrong (or did not had the time to make the choice).  Statistically, picking up a random circle turning red, you have a 20% probability.

In the experiment, if the volunteers had only a fraction of a second to make up their mind, their reported prediction was much better than the expected 20%, whilst if there were at least a second between the appearance of the five white circle and one of them turning right the success result went back to the statistical expectation of 20%.

The experiment was run in different way to filter any possible cheating (even non intentional ones) and it seemed to indicate that is the time was sufficiently short, the appearance of a red circle, that could not have been perceived consciously, affected the conscious prediction. The mind justified the choice made, rationalising it.

There have been several other experiments performed in the last few years and all seems to point out that our free will is a rationalisation of our mind of some decisions that other parts of our brain took "before" we took the conscious decision...

Hence it turns out that I might not have decided to actually write this post. Nevertheless, here it is!