Bio-bot design inspired by the muscle-tendon-bone complex found in the human body, with 3D-printed flexible skeleton. Optical stimulation of the muscle tissue (orange), which is genetically engineered to contract in response to blue light, makes the bio-bot walk across a surface in the direction of the light. Credit: Ritu Raman et al./Nature Protocols 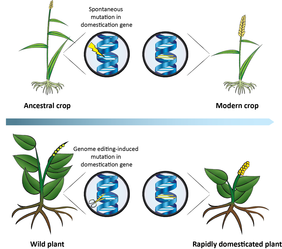 Living cells have already being used in several experiments to test drugs and to study various physiological characteristics. Now scientists are taking a step forward, that is using living cells as component of robots creating a symbiotic organisms.

This is what this news coming from University of Illinois at Urbana Champaign is all about.

Researchers have been able to modify skeletal muscle cells using bio-enginnering to make them sensitive, and reactive, to light in addition to electrical pulses. The modified cells have been implanted onto a micro skeleton 3D printed. By using light pulses the researchers have been able to move the micro system on a plane in the intended direction. In practice they have created a micro bio-bot. At this size it is extremely difficult to create controllable movement and cells turn out to be a very effective way for achieving this.

The 3D printed skeleton contains micro ducts that are used to bring nutrients to the cells.
According to researchers the next steps will aim at including different kinds of cells, like neurones to provide sensing capability.

The magic is made possible by genetic modification that can activate desired functionalities in the cell, like, in this case, becoming sensitive to light pulses and using them as trigger to contract.
The invention of the CRISPR/Cas9 technology is making gene modification feasible and effective (low cost and fast). This allows researchers to experiment different variants and pick up the one that fits best. This technology is now becoming the preferred tool of bio-engineering and it has been proposed recently as a way to "domesticate" plants. Scientists have discovered that domestication of plants is the result of deletion of some genes and by using CRISPR/Cas9 this deletion can be accomplished in a lab. This should not raise concerns that usually are voiced when bio-engineers modify a plant by borrowing a gene from another species. Here there is no species cross-pollination, they are just deleting one or more genes from the plant genome to get the desired properties.