Breakthrough on sight for batteries

Work has started to construct the Tesla Gigafactory in Nevada. Credit: Tesla 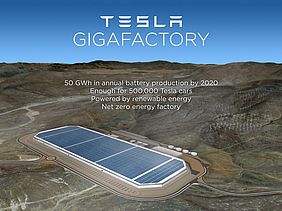 A rendering of the completed gigafactory designed to produce up to 50GWH by 2020. Credit: Tesla

Batteries have progressed significantly over the last 20 years, unfortunately much less than the hunger for power of our many electronic devices so that in the end we don't realise the progress made. We are always short of battery power!

Electrical cars need significant battery capacity and any progress in both capacity, recharge speed and number of recharge cycles can tip the balance n favour of electrical cars. Tesla is probably the most advanced companies in electrical cars and most of its edge on the market is based on their battery technology. They use micro batteries assembly with electronic control on each micro cell. This provides information at the recharge point which can lead to a replacement of faulty cells when you stop to recharge the car and also allows for parallel recharge thus decreasing the overall recharging time.

Production of batteries for cars is pushing manufacturing to a whole new scale. This is why Testa has started the construction of a GigaFactory (see photos) that will be able to build batteries for an equivalent of 35GWh per year once completed and growing up to 50 GWh by 2020.

Also, on March 11th Tesla announced the readiness to produce batteries for the home by 2015 Fall, with the goal of providing local energy storage for house with photovoltaic production that cannot be traded with the grid.

Now a news from the University of Singapore where a team of researchers in cooperation with researchers at the Hydro-Quebec research institute shows a breakthrough that can double the capacity of lithium-ion batteries.

The breakthrough is made possibile by a new cathode made of silicate-based "nano boxes". Again an application of nanotechnology that can change the rules of the game.