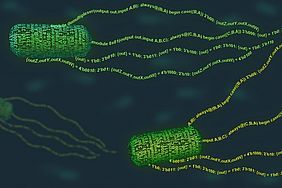 MIT biological engineers have devised a programming language that can be used to add new functions to E. coli bacteria. Credit: Janet Iwasa

This is really amazing! Researchers at MIT have found a way to bridge information technology and genetic engineering.

It is now a few years that scientists have pointed out the possibility to use DNA strings as basic logic gates. This has also been proved through experiments and in a way molecular computers are an example of this (although the processing here is a bit different from a von Neumann computer based on logic gates).

In theory, one could create a string of DNA, implant it into a bacteria and program the bacteria to detect a specific molecules and, as response to that, perform a certain operation (creation of a specific protein). In practice this is really complex. So far, using technologies like CRISPR, researchers have been able to take instructions coded in a DNA of a certain cell and embed it into the DNA of another cell. By picking up the instruction to create the luciferin (that can be found in certain fireflies cells) and implanting them on the gene of an algae that is activated by the presence of some pollutants researchers have been able to create an alga that becomes luminescent when arsenide compound are present in a water cistern thus providing an effective sensor.

The MIT researchers have developed an extension to Verilog, a programming language, that allows a person with very limited understanding of genetic engineering, to program the DNA of a bacteria to make it create proteins that result in specific detection/action. Clearly you cannot program a bacteria to do whatever you may wish it to do. The "compiler" (Cello) knows how to create DNA strings that can create certain proteins and knows the compatibility of those strings with a given bacteria.  Hence, request to the compiler may result in "compile errors" but this is actually a very effective and fast way to learn what you can and what you cannot do.

So far researchers have "compiled" some 60 programs and found that 45 of them actually worked, that is, have resulted in a bacteria performing the actions intended.

This is going to boost the capability of manipulating bacterias, hacking their DNA. It also opens up the way to the creation of nasty properties. As anything in science, the good or bad is not in science itself but in the way we are using it.