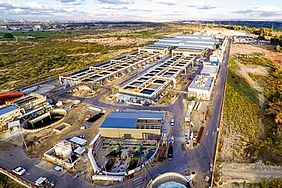 Just read an interesting article on Scientific American showing how technology evolution is now in the field to solve one of the biggest problem facing humankind: the lack of fresh water, the blue gold.

The population growth and the parallel desertification of several areas in Africa and Middle East have been under the scrutiny of many scientists in the past century that warned on the huge problems that would have derived from that. Indeed, the present turmoil in Syria has its root in the draught that hit the Middle East in the last decade of the XX century, resulting in the abandoning of farms and crowding around major cities in Syria that could not provide alternative labour and suffered from water scarcity as well.

Israel was hit by the same draught and invested in technology for desalination. The problem with desalinisation is ... its cost. Technology evolution has managed to slash cost to the point that the latest desalination plant, the Sorek seawater reverse osmosis facility, can produce 1,000 litres of fresh water for 58c of a dollar (the final cost of the water we drink is much higher since it includes much more than production: consider that fresh water from a spring is basically... free, so this water cost some 50c more per 1,000 litres, but that is not a big deal either, since it would mean 0,05c per litre of additional cost).

Israeli researchers have been able to solve the problem of microorganisms clogging the pores of the membrane by introducing a pre-filter using lava stone that can be easily cleaned, and this has led to the slashing of cost. You should read the article to get full details, it makes for an interesting reading.

What I find very interesting is the power of technology to radically change the future. At the end of the last century several experts were seeing a world wide crises of gigantic proportion for water scarcity in several areas. Instead, rather than having to face fresh water scarcity in the coming decades we can work to solve the water problem, as Israelis did, now enjoying a fresh water surplus.

We can expect further progress in desalination technologies coming from graphene, however what has been done in Israel is clearly a working solution.