Big Data to peer into our brains 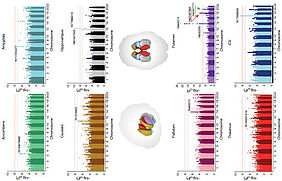 Common genetic variants associated with subcortical volumes and the IntraCerebralVentricular area. Manhattan plots colored with a scheme that matches the corresponding structure (middle) are shown for each subcortical volume studied. Genome-wide significance is shown for the common threshold of P = 5×10-8 (grey dotted line) and also for the multiple comparisons corrected threshold of P = 7.1×10-9 (red dotted line). The most significant SNP within an associated locus is labelled. Credit: Derrek P. Hibar et al./Nature

In a paper published on Nature on January 21st (submitted in April 2014) an international team of researchers point out a discovery of a pool of genes that influence brain structures. This opens up the way to an understanding on how brain structures form and their variations, thus providing the first scientific hope to be able to prevent, and possibly cure, a wide range of diseases and pathologies, including the autistic syndrome.

You can read the detail in the paper, and you can also google for ENIGMA, Enhancing Neuro Imaging Genetics through Meta-Analysis, to get pointers to many articles discussing the discovery. (i find the acronym catchy, ENIGMA was the crypto coding machines used by the German army during the second world war to send messages. Supposedly impossible to crack was actually cracked at Bletchley Park by the team involving Alan Turing, one of the fathers of the Information Technology).

Indeed, it is an important one, but what drew my attention to it, and the reason for this post, is the way they came to this discovery.

Enter into Big Data. The international team analysed over 30,000 genomes from 50 cohorts (aggregation of people showing similar characteristics) to identify variants linked to different volumes of several brain structures. Finding a needle in an haystack is probabilistically speaking quite easier.

To extract meaning from variations you need to compute a myriad of permutations of genes, discard the ones that are irrelevant and focus on the few that can matter. Remember that the relation between the genotype (how the genome is coded) and the phenotype (how the result of the coding becomes apparent) is influenced by a variety of factors and calls in many processes.

The researchers performed what is called a GWAS, Genome Wide Association Study, on a subset of 13,171 people of European ancestry managing the identification of six loci (places in the genome) having specific significance. Interestingly these loci variants influenced specific structures in the brain, not the overall structure. And, even more interesting, these specific variations in brain structures have been associated to specific problems, like cognitive impairment and schizophrenia.