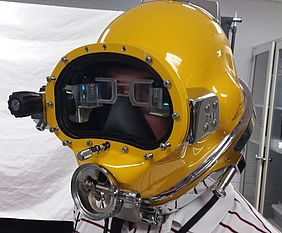 In what might be the first Augmented Reality under water, the US Navy has announced a next generation diving helmet that includes as brand new feature an Augmented Vision Display, AVD.

The display provides high definition visual capabilities that overlaps on the ambient vision. It can display text messages, graphics (including sonar images) transparent images and video. Its functionality can be activated by the diver who also has the possibility to position the images/text in the desired part of the visor to keep an unobstructed view of its surrounding.

The helmet is also incorporating a micro sonar and an advanced camera whose feeds can be displayed by the AVD. This should provide a good vision even in muddy waters.

The Navy expects that this helmet will increase both safety and effectiveness of divers by increasing situational awareness (underwater is often difficult to know where you are and where is up and down...) and seeing on the spot reminders of what they should be looking for, rather than having to remember the pre-dive briefing.

The sensors, like the sonar and road spectrum video camera, are providing a sort of super human capabilities to the diver, something that was more science fiction than science just few years ago.

The helmet should become operational in 2017.