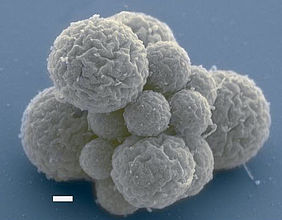 Back in 2010 scientists managed to create the first artificial cell, that means a cell that does not exist in nature and that has the capability of sustaining metabolic equilibrium and reproduce (I have inserted the link to the news as published by the Wall Street Journal to emphasise the potential economic value)  It was done by "borrowing" genes from cells existing in nature to create a brand new one. One might say it was a sort of hybrid at molecular level.

The question that arose at that time was if it were possibile to create a synthetic cell that was even more fundamental, in the sense of having just the genes needed to call it a living cells and nothing more. Or in other terms: what is the minimum number of genes that can sustain life?

Interestingly, the researchers had to use 149 genes that they did not know what they were for. However, without them the cell "did not work", i.e. it was not a cell.  This is clearly open work, finding out why those genes are essential.

Obviously, this achievement only demonstrate that it is possible to have a living cell using just 473 genes. It does not prove that life would be possible with a smaller number of genes.

This quest to find the minimum number is important because it would get us closer to understand how life begun.  And it is also interesting to note how Information Technology is the fundamental tool in this search!