As smart as ants 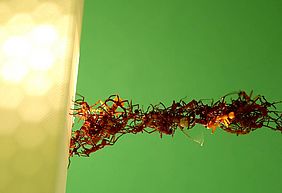 A single ant does not look particularly smart to my eye, it moves around in what seems a random pattern, although in the end I guess it will be able to go back to its nest.  It is just that if it were a bit smarter it would go straight saving quite some time and effort.

I have been fascinated by ants and their colonies for many years now. What amazes me is to see that out of "stupid" singular behaviour an "intelligent" behaviour emerges out of the colony. And of course, I loved to discover the math behind this emergence (Small Worlds...).

That's why I have picked up this news coming from the University of Princeton and University of Sydney where researchers explain how colonies of the species Eciton Hamatum manage to build living bridges to overcome obstacles.

This species of ants, as several others, have worked out a way to create a bridge by interconnecting ants from one edge to the other to let other ants move forward. This is just one example of building of a structure to serve the colony needs. In a recent flood in South Carolina ants formed a life boat that drowned hundreds of them but brought to safety the majority.

The study indicates that there is a sort of collective computation going on to determine the number of ants that can be used to create the bridge minimising the overall effort of the colony to go across. The longer the bridge the more ants have to be stuck in creating it and the shorter the time for the other ants to cross the gap (see the clip). The goal is to find the right compromise. And the goal of the researchers is to unravel the mystery of how can a single ant make decisions that once compounded with all other ants decisions will provide an intelligent solution.

Engineers are already using "ant strategies" to solve telecommunications traffic problems and a few robots that have to operate as a joint team have also been endowed with "ant intelligence".

This research promises to bring one more piece of intelligence to our bag of tricks.