As dark as it can be 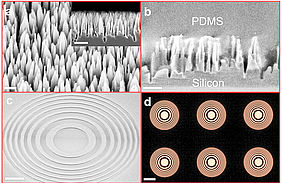 Spikes of silicon create a structure that completely absorb light resulting in a dark area that creates circles in a fresnel lens. More lenses are creating a pattern like the one of the insect's multi-faceted eyes. Credit: University of Wisconsin-Madison

The lenses on your digital camera (as well as those you had on the "past century cameras) work by refracting light beams to converge in a very specific place, the digital sensor. Light beams coming from an object hit the lens at different places but they are bent in such a way to end up, all of them, in a single spot (if that object happens to be on the focal plane of the lens, i.e. it is on focus).

On the other hand Fresnel lenses work on a diffraction principle by bending light. The problem with a Fresnel lens (you used to have one in your last century camera to help focussing) is that it works well provided that the alternating circles have bands that are really black, that is that do not reflect nor let any light beam go through. This is not easy. A real black is extremely difficult to manufacture (of course anything becomes black if you are not illuminating it!), there is always some beams that gets reflected.

Researchers at the University of Wisconsin-Madison have found a way to create bands that are as black as they can be by using special structure of silicon, actually called dark silicon -for a reason!  They have published their result on a paper on Nature.

You can see the dark silicon structure in the figure: it looks like a forest with different kinds of trees. Their diversity and the spikes and throughs are what makes all light beams vanish, none reflected back. They have nano-dimensions, which is what is needed to adsorb wavelengths. These silicon nano-structures are organised in circular bands, also visible in the figure lower part. On the left hand side a magnified view of one Fresnel lens, on the right hand side an ensemble of lenses, each one the size of a pin, less than half mm across.

The lenses are placed on a flexible (plastic) layer that can be bent at will. This result in many lenses that can capture a wide field, like a compound eye of an insect.

The presence of multiple lenses provide more information and that allows a computer to create a much better focussed image (something that is difficult to achieve with a Fresnel lens).

Researchers are working to place silicon components on the same plastic layer (flexible electronics) to create ready to use sensors fitting a variety of applications.