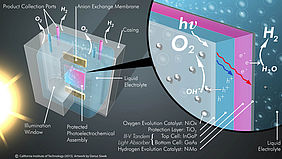 Converting sunlight into electricity has taken up the efforts of thousands of scientists in these last fifty years leading to increased conversion efficiency and lower cost.

The problem however of uneven availability of sunlight that does not match the demand of power leads to the need for storing the power produced till the time it can be used. And electricity is not that easy to store (in huge capacity and at low cost).

At Caltech Joint Center for Artificial Photosyntheses a team of researchers, working on a five years project, managed to develop an artificial leaf mimicking the processes of photosyntheses to split water into oxygen and hydrogen. This latter can be used as a fuel packing plenty of chemical energy.

The system is composed by a photoanode, a photocathode and a membrane. Each of them has required specific design and innovation to perform and to work in synch with one another into a complete system.

The photoanode is where sunlight is captured and used to oxidize water molecules generating protons and electrons. To avoid "rusting" on the anode the researchers have covered it with a thin (62nm) layer of Titanium Oxide. In addition the water splitting requires a catalyst. Platinum works well but is quite expensive. The researchers discovered that a 2nm layer of nickel works as well as platinum and it is much cheaper!

Protons and electrons are recombined on the photocathode to generate hydrogen that is then stored in a tank.

The plastic membrane is used to separate oxygen from the hydrogen, a crucial process to avoid explosions that would occur when the two gases mix.

It is not the first time that an artificial leaf has been produced but this result brings hydrogen generation powered by solar light within affordability. More work is still required to create an industrial robust system with a long operational life (so far they have demonstrated 40 hours operation only, and that is too short to make the system usable).