Artificial intelligence looks at natural one 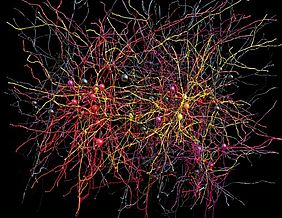 Neuroscientists have constructed a network map of connections between cortical neurons, traced from a ~100 terabytes 3D data set. The data were created by an electron microscope in nanoscopic detail, allowing every one of the “wires” to be seen, along with their connections. Some of the neurons are color-coded according to their activity patterns in the living brain. Credit: Clay Reid, Allen Institute; Wei-Chung Lee, Harvard Medical School; Sam Ingersoll, graphic artist

The next decade will be, according to many observers, the decade of the brain. The advance on our understanding of the brain is fuelled by the availability of tools that allow scientists to look inside the brain. There are ongoing projects, in Europe and in the US, aiming at looking at a working brain (using fMRI and other technologies) and identifying the connections among neurones, both gigantic endeavour.

One crucial aspect will be to connect the two visions, and this is where this news fits in. It reports on the advances, and tools developed to make them possible, in mapping a tiny area of a brain, the pyramidal cells in the mouse visual cortex. The goal is the mapping of functions on individual neurones and circuits in a cube of one mm. It may seem an amazing tiny volume, yet it comprises millions of neurones and synapses. The complexity in working on such an area and its minuscole dimension with respect to a brain is a clear indication of the tremendous complexity and effort that will be required to achieve the goal of "mapping" and "understanding" the brain.

Interesting, and the reason why I am posting this news, the approach followed to create the functional mapping. The team of researchers from Harvard, CMU, Allen Institute and Leuven University have created a data base with 100 TB of data scanning millions of 3D images captured from looking at the firing of neurones in the visual cortex firing when the mouse is stimulated with images of vertical or horizontal lines and from the subsequent slicing of the brain area (poor mouse...) in tiny layers.

The reconstruction of the interconnections among the neurones is a joint effort between computer analyses and human analyses.

The aim of the project is both to reach a better understanding of the neuronal circuits in the cortical vision area and to exploit this knowledge for furthering artificial intelligence algorithms. This is based on the assumption that the neuronal architecture is at the bases of the processing prowess of the brain in understanding images of the world.