"Artificial" Intelligence - it is getting "natural" - Part 2 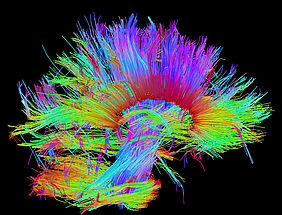 Intelligence seems to be an emergent property of myriads of processing/storage points densely interconnected. Image of the Connectome - Credit: The Human Connectome

To me, the big mystery of intelligence is the lack of a point where we can see a division between its existence and its absence. We are used to black and white, either or.  Intelligence is a fuzzy set of grays.

It is not just a perceptual thing, like saying a dog is intelligent, and then saying somebody is stupid if it shows the level of intelligence of a dog…

Intelligence has many facets, it is fundamentally difficult to define. This relates to the way intelligence arises. It stems from the interplay of relatively simple things, neurons. We find neurons in all animals and they are all basically alike, they all behave and interact in the same way. If you were to bring a neuron from a worm inside a human brain (leaving apart tissue compatibility) it would find itself at home and it would interoperate with the other neurons without any disruption.  That also applies if you insert a silicon based neuron into a brain, as we have started to do: it works along with carbon based neurons.

We usually say that two turkeys don’t make an eagle. This is not true when we look at neurons. Quantity makes the difference, quantity means quality.

Although neurons in a human brain are alike neurons in a worm, their sheer number makes intelligence emerge. You cannot pinpoint any neuron in a brain where intelligence is located, by removing a single neuron you are not affecting that brain intelligence.

The math of small worlds was probably the first to cast a light on the mystery, although it is far from being resolved.

What is now clear is that quantity in this area means, or at least is a prerequisite for, quality.

What we have been seeing over these last 5 years is a tremendous growth in the basic elements that are pre-requisite for intelligence: processing, storage and communications.

People are now (mostly) interconnected by a world wide infrastructure that in the last years has expanded to include the personal devices, mostly cell phones but also tablets, PCs and media centers. These devices have processing power and storage that compares to the ones of Supercomputers 25 years ago (the iPad Pro 1.5 GFLOPs processing capacity compares to the fastest supercomputer in 1990, the Japanese SX-3/44R.

This kind of processing power is expected to become available in smart phones in 2017.  There are over 2 billions smartphones in 2016 and they are likely to grow to 4 billions before the end of this decade. Each of these phones will have several billions transistors, the elementary processing unit that can compare to a neuron. Do your math and you’ll see that a gathering of some 50 people with a smartphone each will, numerically speaking, have a quantity scale in processing terms that compares to a human brain (loosely speaking, the point is  … to make the point).

These devices are, potentially, all connected with one another and more importantly we are moving towards a communication fabric, the evolution from the communications infrastructure, made by bits (in the Cloud and in the Fog) where the physical connections are relegated to access functionality, like it happens in the case of our nerves connecting the periphery of our body to the brain.  The Cloud and the Fog (cloud in the devices at the edges) is the real brain like structure. And there the numbers in terms of processing power, storage and data interconnections compare to a human brain (not yet, but we are close and we will be exceeding brain neurons and connections “quantity” in the next decade). AlphaGo is an example of this kind of “quantity” that makes intelligence (although of a specific sort) emerge. Watson, and its applications in the medical field and even in the hotel concierge services, like Connie, is an example of a “Brain in the Cloud”.