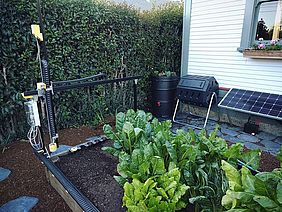 A robot in your courtyard, fully programmable with Open Source. Credit: FarmBot

A US start, FarmBot, has open up funding request for 100,000$ to build a farming kit one can use in his own backyard, on a roof or on a terrace.  The kit, called Genesis, is an autonomous robot that can be programmed using open software, to design, create and maintain your "farm".

As of end of July they have already received over 600,000$, six times more than the target.

The bot can be easily deployed in your personal farm, with a do it yourself approach. It moves on a rail and the software guides it in the various activities.

You start by designing the farming area, what kind of plants you want to grow (so far it has a library containing 33 common crops, from artichokes to squash, from potatoes to peas... and more are coming through crowdsourcing).  The software design the patch placing the plants in the right place and vicinity. Then you load the seeds and the bot takes over. It seeds, water at the right time, tend to the sprouts removing weeds and let you know when it is harvest time.  All by itself.

The target cost is 1,000$ although the first version will likely cost around 3,000$. The patch covered is some 3mx1.5m, not that big but thought to fit on a terrace or a roof garden.

What I find interesting is the power of crowdsourcing and open software and the flexibility it can offer. The robot will become more versatile over time and what you learn from its use can be fed back to the common knowledge growing it to the benefit of all.

Also interesting to find robots expanding their field of application entering the mass market. One might object that a cost of 3,000$ is pretty high for a roof garden farm. However, consider what the cost of such a system would have been just 10 years ago (probably in the order of 100,000$). With a target price expected to decrease to 1,000$ it may become interesting to a wider market. On my side, as an example, I pay over 1,000$ per year to have a gardener coming twice a month to tend my terrace. Given three more years it is likely that the price of the gardener will go up, over the price of a bot gardener...

Another job attacked by the digital world...