Are we shooting in our foot? 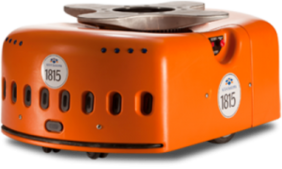 One of the 10,000 Kiva robots used by Amazon in its warehouses. Credit: Amazon

Amazon back in 2012 bought Kiva, a robotic company specialised in robotic warehouse management. Now, less then two years after the acquisition Amazn is using 10,000 robots in a few of its warehouses in the US.

Interestingly, they have declared that robots have proved better than humans in several respects:

1. they can work around the clock, without filing any complain

2. they don't need to work in a lighted ambient nor they need the temperature at an acceptable level (20-25 degrees). This translates into significant energy (and dollars) savings for Amazon

3. they are faster in picking up packages and can be continuously redirected to minimise the travel

4. they can talk to the shelves that in turns will move to get the package closer to the robots

5. they don't need to learn where a package is, they ask each and every time where it is. This allows Amazon to reconfigure its warehouse to make pick up more efficient.

All these "savings" (in energy, time, flexibility and dollars) go to the advantage of Amazon and of its customers. However, it doesn't increase jobs posts, quite the contrary (although so far Amazon has declared that has not been forced to lay out any worker so far, it is just reallocating them).

True, it is not the first time that we see technology killing jobs, think at the number of jobs lost in agriculture in the last century or the ones lost in the assembly lines of electronics goods, but so far the number of job lost was more than balanced by the creation of new jobs. This does not seem to be the case in the last 5 years, according to several economic studies.

By making robots that are progressively getting better and smarter (in the near future) than human being we are actually shooting on our foot. And, unfortunately, there is no way out on sight.