Are we ready for Mixed Reality? 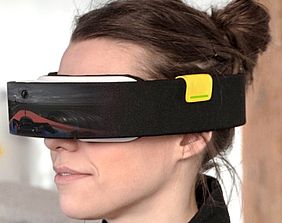 “Light” — a conceptual virtual-reality device for 2020 that facilitates shared experiences. Future virtual-reality devices will be untethered, smaller, and lighter, and thus more mobile, further “tuning out” physical reality with more lifelike 3D video and audio, and stimulating other senses beyond sight and sound while allowing for “inclusion” of others. Credit: Artefact

Technology evolution in the area of interfaces, from screen to micro-projector to bio-interfaces that might, eventually, couple our brain with data, is leading us towards a new space that we have never been used to.

Mind you. It is not a "first". Not long time ago "television" invaded the homes of billion of people all around the world and changed our way of spending the evening, cell phones have permeated our Society even faster and changed, shrunk, our world and are now in the process of bridging our physical perception with the stream of data made accessible everywhere, at anytime, through the smart phones.

What is somehow new is the velocity of the change and the "seamless" factor. At the time of television the "wow" factor was great! It was clearly something different.

The cell phone, in its first appearance was also a clear novelty, although not as flabbergasting as the television, but the transition to the smart phone has been less noticeable, even though it brought along bigger changes than the cell phone (we were already used to "voice calls").

Many sociologists, and technologists, are looking at what is next and how this "next" might change, in a deep sense, our Societies, our relation with the world and with ourselves as communities.

Mixed reality seems to be the big change around the corner, a change that may come upon ourselves without being perceived.

We already have augmented reality, that is an over-position of bits (data and information) on what we are looking at, through a smart phone or more sophisticated, and cumbersome, devices like Oculus Rift. In the next decade these devices will become much less conspicuous and over a ten year time they might become so common and un-intrusive to fall out of our perception.

This will be a major step since it might result in the creation of a new reality, a distortion of the hard reality through the newly rendered one.

This might create big social issues since some people might perceive a reality (MR) that will be different from the one perceived by the have-not, the plain reality.

How are we going to cope with that? We better start to think about these issues now, and shape the evolution in a way that will not be harmful. A first attempt has been the creation of three "laws" for MR, similarly to the three laws created by Asimov for robots. Asimov proposed them in 1942 and over 60 years went by before they had to be put in action. We have a shorter period ahead of us for MR, so it is about time to reflect on what might happen and start shaping a "good" future.