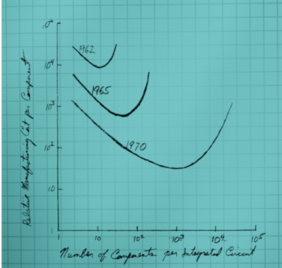 The original drawing by Gordon Moore indicating the "soft spot" in chip manufacturing in future years. More and more transistors would be framed on a chip at lower and lower cost. Credit: IEEE Spectrum 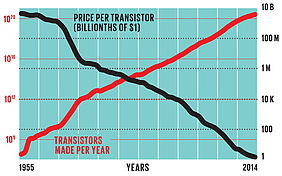 In 2014 an estimated 250 billion billion transistors were manufactured at a cost of 1 billionth of a $ each. Credit: VLSI Research

On April 19th, 1965, fifty years ago, the Electronics magazine, Volume 38 - Number 8 published a paper by Gordon Moore "Cramming more components onto integrated circuits" that started with a sentence that have remained in the history of electronics: "The future of integrated electronics is the future of electronics itself". In the same paper he also stated that the density (number of transistors per chip) doubled every year in the last five years (1961-1965) and he saw no reason why such a trend should not continue till 1975 leading to a staggering 64,000 transistors per chip.

Few years later he revised his prediction slowing it down to a doubling every 18 months. Since then this became known as the Moore's law, and it has basically hold true in these last 50 years, with a reasonable expectation to remain valid till the end of this decade. For the record: in 1975 the chip contained 32,000 transistor, half of what predicted by Moore.

Last year, 2014, chips with over 1 billion transistors were common and no longer making headlines. IEEE Spectrum in its special edition to celebrate the 50 years of the Moore's Law estimated the total number of transistors manufactured in that year around 250 billion billions. In that single year were manufactured more transistors that were ever manufactured since 1947 to 2011.

That first sentence of Moore's paper "The future of integrated electronics is the future of electronics itself" proved to be true (whilst at that time many felt that intergration was not the way to go) but it also led to (made possible) progress in most other fields, from genomics to telecommunications and Internet, from agriculture to consumer products. It would be difficult to name a field where electronics has not been one of the fundamental enabler of progress.

It is interesting to note the reason why many people felt, at that time, that integrated electronics was not the way to go.

In 1959 Jean Hoerni at Fairchild invented the planar transistor, a two dimensional transistor that made use of edges rather than surfaces as it was the case of the original transistor that was a 3D structure (as well as the mesa transistor that Texas Instrument invented in 1954 further perfected by Bell Labs in 1955 and commercialised by Fairchild in 1958). The planar transistor allowed wiring to be placed on top of it (rather than on the side) and this in turns allowed transistors to be placed side by side connecting them in the third dimension with wires. In 1961 Noyce developed the first integrated electronics by placing 4 planar transistors on a single sliver of silicon and connected them with wires protruding from the top. The resulting component took less space than having to solder four transistors on a board. The wires to connect the internal components would be replaced by aluminum paths on the silicon insulating them from the component by a silicon oxide layer. Remember that in 1958 Kilby invented the first integrated circuit using silicon to make resistors and capacitors and showed on September 12th, 1958, that a sin(x) curve could be plotted on an oscilloscope by a single "chip".

The problem was that the cost of a single transistor at that time was about 10$, transistors in the 4 assembly cost 30$ each. Only NASA, that absolutely craved for space, could afford that. Hence the critiques on integrated electronics.

What Moore's paper said, although this is not usually emphasised, is that for every production technology in integrated electronics there is a soft spot (see the original Moore's drawing) where economics make the integration affordable and that the evolution was not just in the direction of increased density (more transistors integrated on a single sliver) but also in the direction of lower and lower cost at the soft spot.

He claimed (and did so at Intel) that the industry should pursue an evolution that increased the effectiveness of the package at the soft spot.  This is what ignited the revolution that is still continuing today (and this is why some observers are saying that the Moore's law ended in 2014 when industry was no longer able to better the soft spot although they can keep bettering the density moving onto the 14nm production and planning for the 10nm).

It is important to keep in mind this tight binding between technology and economics when we talk about innovation. Innovation exists only when there is a market for it and the first condition to have a market is affordability.  It comes even before "usefulness". You can sell something that is useless (it is called "marketing") but you cannot sell something that is not economically affordable.

As we look back to these unbelievable 50 years we should learn the economics behind them and make sure we take this into consideration every day we are pursuing innovation. A must at EIT ICT Labs!