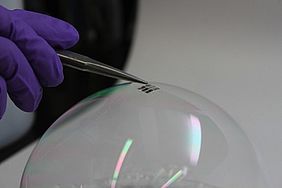 MIT researchers created solar cells that are so thin and light that they can be draped on top of a soap bubble, without popping the bubble.

One of the most amazing thing Nature does, at least for me, is being able to create working "stuff" of minute dimension. Think of a mosquito flying or a retina to capture photons. Humankind has created progressively more complex and amazing things by shaping components and assembling them into a functioning "stuff". This approach results in the creation of "stuff" that is relatively bulky, at least when compared to Nature results. Nature builds bottom up, assembling molecules, we have been building top down.

What we are now seeing is an increased capability in our manufacturing skills that results to smaller and smaller functioning "stuff".  Nanotechnology is paving the way.

This is the case in this news coming from MIT where researchers have been able to grow a solar cell so thin and lightweight that it can float on a soap bubble. The material is grown by deposition of molecules forming a layer 1.3 µm thick (thin), that is some 60 times thinner than a human hair, and so lightweight that one square m would weight less than 4 g.

The overlaying on a soap bubble is just a marketing gimmick to hit our imagination, the expected use is to have this photovoltaic layer deposited onto any king of surfaces and any kind of objet to harvest light and convert it into electricity. The efficiency shown compares to the one of current best in class solar panels although the efficiency per weight is some 400 times higher (6,000 W per Kg produced vs the 15 W per Kg produced by a conventional solar panel).  This makes this technology of particular interest for space applications were weight is a major concern. It makes it also well suited as a coating for fabric since it won't increase the weight of your jacket in any perceivable way.

In commercial terms we are still far from availability, possibly ten years away. It is normal for breakthrough technologies to require this much time to move from the demonstration of the idea to its commercial availability.