All of a sudden my camera resolution seems tiny 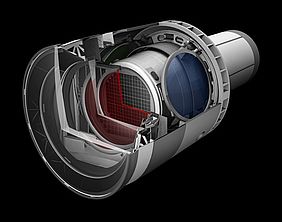 Rendering of the LSST camera. SLAC is leading the construction of the 3,200-megapixel camera, which will be the size of a small car and weigh more than 3 tons. The digital camera will be the largest ever built, allowing LSST to create an unprecedented archive of astronomical data that will help researchers study the formation of galaxies, track potentially hazardous asteroids, observe exploding stars and better understand mysterious dark matter and dark energy, which make up 95 percent of the universe. Credit: SLAC National Accelerator Laboratory

I have a Nikon D600 with an amazing 24 million of pixels. And I used to be very proud of that resolution. But now I just read of the plans to equip the Large Synoptic Survey Telescope, LSST, due to become operational in 2022, with a digital camera with the staggering resolution of 3,200 million pixels! That surely dwarfs my camera and yours as well!

The camera will be developed at SLAC National Accelerator Laboratory in California and will be mounted on a telescope in Chile (where there is the driest desert of the world with very clear skies all year 'round.

It will take pictures and movies of the Southern sky with a resolution never before possible, generating 30 TB of data every night, 6 million GB per year. These data will be open to researchers all over the world to study the cosmos. The hope is the collective intelligence of the world will be able to unravel the mystery of dark matter and dark energy representing 95% of the matter and energy in the universe. We think we know they really exist, according to our understanding of the gravitation and general theory of relativity they have to exist, but we haven't been able to find them.

The sky will be covered in a period of 10 years with scientists expecting to resolve tens of billions of celestial objects.

Well I was just starting to think that may be that should be my next camera when I read the specs: it will have the size of a car and weight 3 tons. May be I'll better stick to my Nikon for a while...