All cities have not been smart "enough" 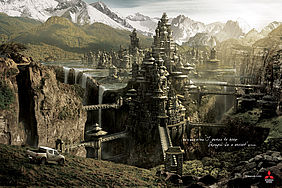 The ideal city of Shangri-La as imagined in a Mitsubishi commercial. Credit: Mitsubishi

Shangri-La was the ideal place. People lived in harmony a long life a perfect Smart City (and valley). Unfortunately, Shangri-La it is a figment of the imagination (of James Hilton).

Cities have never managed to be "smart" enough. This is not surprising. A city is a "living" system in a dynamical equilibrium. Its infrastructures can support a certain number of users and certain types of usage. As their support is good the city attract more people increasing the number of users to the point where the infrastructures are no longer as good as they were from a user point of view. Still, they make the city work and people keep flocking as long as the city maintains a small advantage over its surrounding, although the life quality in the city degrades. This compares to the "tragedy of the Commons", expounded in the economics theory by Garret Hardin. The independent race to well being of single individuals lead to a decrease well being of them all.

The binding of economics, resources, infrastructures and service quality is such that any city has an equilibrium point that is a tradeoff between the well being of citizens and its economic sustainability. At least this has been the case for centuries. An interesting question is if a different tradeoff can be achieved thanks to the progress of technology. Empirically, we can see that today's cities are better in their capabilities to manage larger group of people (megalopolis did not exist in the past simply because infrastructures were not available to support them). However, as technology has allowed to raise the bar of cities "capacity" problems have also got bigger and more challenging.  As they say: "4-wheel drive gets you stuck I'm more inaccessible places".

The fundamental issue of a city being in a dynamical equilibrium state affecting/affected by economics and well being (attractiveness) of its citizenship remains.

A new science of cities is born, the one studying cities not as "machines" but as "organisms". The approach is rooted in the mathematical theory of complexity.