All cities have always been smart 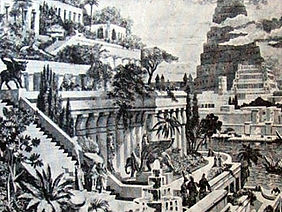 The Hanging Gardens of Babylon were a marvel of architecture and technology. Pillars sustained the weight of terraces and an irrigation system provided the water to the plants. Credit: http://hanginggardensofbabylon.org

I am in Paris giving an opening talk on Smart Cities, the EIT ICT Labs organisers having asked me to take a broader view on the subject. And here I am sharing it with you.

The title of the talk is "How will be our cities be remembered a thousand years from now?". Now that is not an outrageous length of time! We have many cities today that go back a thousand years (and much more).

We tend to consider our time as a very special time, and of course it is since it is the only one we are here. At the same time, if you step back and take an historical perspectives you need to realise that it is just a tiny fragment and cities survive their citizens. Sure, there have been times that marked some profound change that still reverberates today. So the question is basically if we can recognise the inception of a change that will show its effects for centuries to come.

What does Smart City mean? It means different things to different people so let me try with my own definition: A Smart City is an environment that makes life of citizens happier (than the surrounding) and uses minimal resources. I would say that having happy citizen should be the goal, using minimal resources to achieve that goal is the measure of "smartness". And I do believe that technology is instrumental in this "smartness".

It is easy, at least for Italians, to remember the big water (aqueduct) and sewer infrastructures that make a city of a million people possible (Rome in the first century BC was the first city to reach that number of inhabitants), along with its road infrastructure.

Also by looking at Venice in the XII-XV centuries one can see the complex infrastructures sustaining what was the most sophisticated economy of the time with commerce spanning the (Western) world.

This is not about Italy. everywhere in the world where cities thrived there were amazing infrastructures sustaining them. Look at Paris and its ingenious "pneumatic" infrastructure covering the city for over 100 years, being used to send parcels and for some time, to synchronise the clocks around the city!