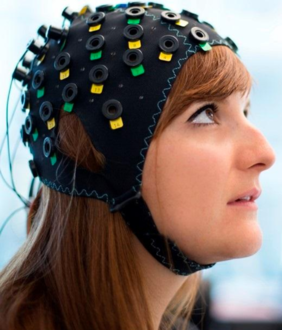 There is a terrible syndrome that may affect patients suffering from ALS, Amyotrophic Lateral Scleroses, the lock in syndrome. These patients completely lose the possibility to communicate. The ALS, as it progresses, leads to a paralyses of the muscles and even the limited communications that is maintained by using eye movements to point at characters on a computer screen is lost.

At the Wyss Center for Bio and Neuroengineering in Geneva a team of researchers have found a way to unlock these patients (at least in a crude form) letting them communicate by thinking Yes or No. Even these basic form of communications is not feasible using the detection of electrical signals. Today's technology is able to correlate brain electrical activity to movement "intention", and BCI (Brain Computer Interfaces) based on this are now becoming common.
Researchers have used fNIRS, functional Near-Infrared Spectroscopy, to measure the use of oxygen in the frontal lobes of the brain and have been able to correlated this with the thinking of "Yes" or "No".

Notice that even for this very simple communications the measured accuracy is around 70% (which is just slightly better, although significative, then a random 50% since there are only two possible choices). By repeating the questions and creating sets of questions it is possible to become almost certain of the intention of the patient. Interesting, and unexpected, at least for me, is that several patients when asked if they were happy responded "Yes".

The "unlocking" is the first step for trying more effective ways of helping these patients and so far nothing has worked. In this sense it is a great step forward although we can fully appreciate how limited such a communications is (depending on the questions posed).

This news also illustrates how rudimentary is our capability to "read" thoughts in a brain. There are progresses being made but they are extremely slow.