A trillionth of a second 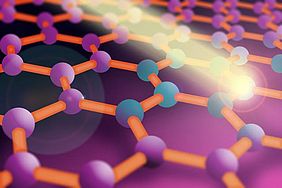 A light pulse changes the conductivity of a graphene layer showing the fastest snitching time ever detected. Credit: MIT

A trillionth of a second is an amazingly short time. A light beam will travel just 0.3mm  in that span of time and light is pretty fast!

Even measuring this time span is at the edges of current technology.

I stumbled onto this number reading at a news from MIT describing the work carried out by a team of researchers to study the interaction between light and graphene.

Over the last few years some contradictory results were obtained in the conductance of graphene layers. Sometimes it behaved as a metallic conductor (an extremely good one) and some others as a semiconductor.

To test this phenomena the researchers sandwiched a graphene layer between a transparent layer and an insulating layer beneath which they placed a metallic plate serving as electrode. The other electrode was the graphene layer itself. By varying the voltage between the two electrodes it was possible to change the electron concentration in the graphene layer.

Researchers used two laser, one with burst of light with a lent of 1 trillionth of a second and another at lower frequency used to measure the change in conductance. This latter represent the key innovation that has allowed to perform the measure without affecting the behaviour itself. Until now, an extra conductor was needed to measure the conductance.

The researchers were able to discover why the graphene behaves in such a way: basically the electrons flow at a constant speed (like photons although at a much lower speed -remember we are talking about the particle property of electron, not its wave property) and the light burst, even is such a short span of time heats up the electrons and this slows them down.

It is not really clear how this properties of graphene will be exploited, although the researchers are hinting the possibility to create ultra fast light detectors, over a broad range of frequencies, that in turns may be used for broadband communications.