A new way to prepare hamburger ... 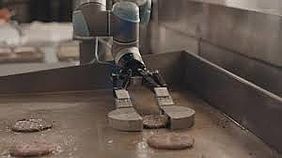 Tired of flipping burger? Use a robot! Credit: Miso Robotics

It is about a week that this videoclip is being posted on Facebook and draws views on Youtube. It is, technologically speaking, not a big deal.
A robot can take care of cooking hamburger, replacing the “cook”.  It embeds some sophisticated technology, like a camera to look at hamburgers on the grill, and a software with spatial savvyness to direct its arm to pick up and flip the hamburger at the right time. Of course it is also able to move the cooked hamburger from the grill to the waiting buns and stack cheese and salad leaves on it to deliver the finished, tasty meal.

The fact is that these technologies are no longer impressive, they have become “normal”, and we have robots in production lines that are way more sophisticated.

Yet, the idea of a robot that is affordable and as such can be used in menial tasks (no offense intended here for cooks…) shows the level of commoditization of these technologies that can now be used to replace a 15$ per hour blue collar with a 0$ per hour robot.  Miso Robotics, the company producing the robot hamburger-flipper  has not set the price saying that they are evaluating the selling strategy (price per flip?) but their whole goal is to produce affordable robots.

Most of the comments to the clip lean on concern of job losses because of this and other robots and basically none lingers on the amazing progress of technology (both in performance and, even more important, in affordability).

Optimists may say that if the past is of any value we have seen millions of job lost in agriculture, with increase in productivity, decrease in cost and rebalance in jobs growth in industry. Pessimists may say that we are not seeing any emerging activity that can make up for the job losses these flippers and their siblings are causing.

I tend to lean on the optimistic view. For some interesting thoughts on the way robots are replacing us in the job market you may want to read the nice blog of Shelly Palmer, Life after the Robot Apocalypse.