A new circuit is born! 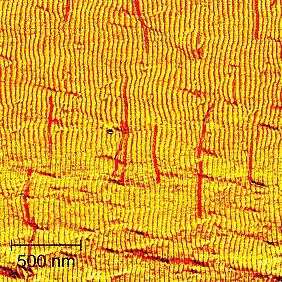 Electrostatic surface interactions cause DNA nanotubes (red) to align along the prefabricated nanopattern (similar to sand dunes) on a silicon surface. Credit: HZDR

Isn't this what we often hear and say? The idea of birth is of course connected to living things, you cannot have the birth of a piece of rock but nevertheless, as we often do with languages, we borrow the concept of birth from the living things and apply it to inanimate things.

However, the situation might become fuzzy as researchers are finding ways of using DNA to actually create circuits as I read on this press release of the HZDR, the Technical University in Dresden, Germany.

DNA in cells is a sort of scaffold making sure that molecules connect in the appropriate way to form more complex ones (proteins) and are very effective in doing that (the process is actually pretty complex but the way I am phrasing it should give the basic idea). Today the making of a chip is done in a top down way: you start with a big wafer of silicon and you etch it and add specific molecules to create transistors and whatever is needed. This process has proves extremely effective and the Moore's law is a clear evidence of that. We (they) have been able to etch in finer and finer ways using more and more sophisticated (and expensive) equipment reaching sizes measured in tens of nanometers (14 nanometers is the current leading edge fabrication). Shrinking further is becoming more and more difficult and costly.

That is why researchers are studying alternative ways for creating circuits, using different materials (big hopes are placed on graphene) and radically new approaches at their manufacturing.

What researchers at Dresden (and also in other places) are studying is a bottom up approach, typical of nanotechnologies, where the chip is being built by assembling molecules. This is clearly pretty difficult since you have to tell each molecule (after having identified the right one) how to connect with the others and where. But this is exactly what DNA has been doing for billion of years.

In Dresden researchers have been able to adapt an already available technique, DNA origami, to create a process that can steer the self assembly of nanostructure to create a circuit.

The origami technique is a way to create long strings of DNA by pairing multiple smaller DNA strings. Dresden researchers produced nanotubes with a length of 412 nm and a diameter of 6 nm that are basic components to develop a circuit. The problem is how to align in the right way these nanotubes and for that the researchers exploited the principle of self organisation that is at the bases of the formation of living beings as well as in inanimate structures like the waves of sand created by the wind.

In the words of one of the researchers, Adrian Keller:

"Similar processes are at work here. We irradiate the surface onto which we want to place the nanostructures - in our case, the silicon wafers - with ions. This results in the spontaneous appearance of ordered nanopatterns resembling miniature sand dunes. At that point, our job is pretty much done as natural processes are taking over and doing all the work. This technique works so well that not only do the small tubes follow the wavy patterns, they even replicate occasional pattern defects. Meaning this technique should also allow for production of curved nanocomponents."