A molecular switch for nanoscale computing 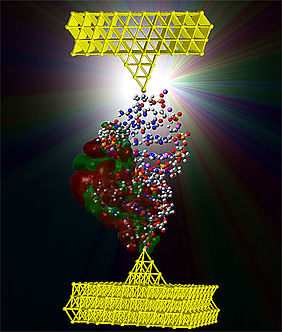 A model of one form of double-stranded DNA attached to two electrodes. Credit: UC Davis

As the Moore's law comes to an end researchers are exploring radically new ways to create transistors that would go beyond silicon.

One of them is looking at DNA and we have seen a few example of molecular computers that area already in use in area like genome sequencing were a high degree of parallelism makes sense.

Now I stepped onto a news from the University of California and University of Washington where researchers have discovered that DNA molecules depending on their configuration can have a low or high conductance (allow less or more current to flow through it). This is basically what happens in a transistor. Depending on the voltage applied the semiconductor switches from being an insulator to being a conductor and the increase of voltage applied (within certain limits) translate into an increase conductance, i.e. current flow.

Same goes with DNA. The researchers have found a way to switch from A-form to B-form of DNA and by doing that they create a molecule that changes its conductance.

The B form is the usual one (the one we have in our cells) the A form is a more compact structure. This latter has higher conductance, the B form has lower conductance.  By exposing the B form to ethanol the molecule shrinks transforming into the A form. Removing the ethanol switches it back to the B form.

Interestingly, the DNA molecule can be designed in such a way to be self assembled, making it easy to manufacture it.

According to the researchers a transistor based on DNA would use less power, more energy efficient, than a silicon based transistor.

However, this research may find some application within cells or in drug delivery at cell level where one transistor might be enough.