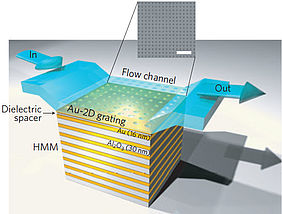 If you are like me you can't imagine something that weights 1 quadrillionth of a nanogram. That is 1/100,000,000,000,000 of a billionth of a gram! That is the weight of molecules that doctors would like to intercept to detect early signs of cancer.

It looks like an impossibile feat, yet it is what researchers at Case Western Reserve University has reported to do.

Cancer cells leave a trail of specific molecules. If you were able to detect them you could detect cancer when it is not apparent in clinical symptoms, at its early stages. However, detecting these molecules is extremely difficult in the early stages since there are so few of them. There might be just one or two in a drop of blood.

What they did at Case Western was to create a sensor that is so sensitive that it can detect even a single molecule.

The first hurdle to solve is the capturing of the molecules. The molecules keep moving around and intercepting a single molecule looks almost impossible. To do that the researchers have placed on the sensor specific molecules that bind to the target molecule. Given sufficient time, it becomes statistically probable that the desired molecule, if it is present in the solution, will pass in the vicinity od the binding molecule and gets stuck to it. To make the "sufficient time" manageable, i.e. to shorten it, the researchers have created a micro-fluidic structure that funnels the solution in such a way to increase the probability of the encounter of the molecule with the intercepting one.

At that point the problem is to detect that such a binding has occurred.  Here comes the real breakthrough of the researchers. It is well known that light bounces of objects (that's why we see them) and the way it bounces tells us a lot about the object itself (its color is a property of the object surface, you change the surface characteristics and you get a different color because the reflection changes). The same happens with very small objects, including molecules. However there is a problem. If the molecules is smaller than 500 nanometers the light simple goes around it -behaving as a wave. Look at sea waves: if the crash onto the shore they get reflected but if there is just a rock on their path they simple go around and keep going their way.
The problem is that the molecules the doctors are interested in are smaller than 500 nm, hence the light wouldn't be affected by them. In other words one could not detect the presence of a binding. To make this possible the researchers created a plasmon based meta-material consisting of sixteen layers of reflective and conductive gold and transparent aluminum oxide, each layer 10nm thick. These layers concentrate, you might even say "shrinks" light wavelength to the point that they become smaller than the dimension of the molecules and therefore are affected by their presence.

The resulting sensor is a million fold more sensitive than current method for detecting bio-molecules.