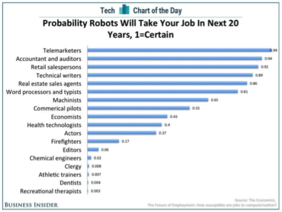 Are we going to see robots eating into today's workforce? Yes, it is a given. But... In the graph the probability that a job will be replaced by a robot (1= certain). Credit: Business Insider

Yesterday I was part of a Panel at the Stockholm Result Day of the EIT Digital where the focus was on the Jobless Society. There were 3 distinguished panelists, plus myself and the director of the orchestra, Magnus Boman, who is also the person leading the radar activity within EIT Digital.

Are we heading towards a JobLess Society (JLS for short, not the pop band)?

The other three panelists, with different hues, were inclined to say YES. However, one of the panelists felt this was bad, and it would fuel a rightwing evolution in politics (fascisms was mentioned quite a few times), another panelist noticed that the concept of a JLS is quite articulated and we cannot just focus on technology/innovation as the root causes for job lost nor necessarily those losses couldn't be offset, at least partially by evolution in other areas.  Interestingly, the third panelist was pretty certain of the coming of a JLS but at the same time he saw that as a conquest of humanity, indeed something we should be seeing as a goal!

The audience had some perplexities, like who is going to pay taxes, how can an economic system survive in a JLS.  The point made by the panelist was that we will have to find other ways to share wealth, but the wealth will continue to be produced by robots.

I was the only one that had/have a different vision. I do not believe we are going towards a JLS nor that we will ever (big bet) have a JLS.

A lot of the bruhaha on the advent of a JLS is based on the perception that we are living in a very peculiar period of human history. A time when our capability to invent smart robots that can do whatever we are doing, faster and possibly better, and most importantly cheaper, is leading us to replace the present manpower with roboticpower.

Actually, if you read history books you will find over and over the perception that any time was considered a very special time by those living it. The fundamental reason being that they happened to live in that time.

We have seen continuous evolution of our social, economic and productive systems. And at some points in history indeed we have seen dramatic changes. Then we have also seen that through pain and ingenuity the world has adapted and went on.

The shift from the agricultural society to the industrial one dramatically decreased the workforce needed in agriculture, it created new jobs in the manufacturing but also in other areas, like entertainment, travel...

In the 80/90ies we have seen probably the most dramatic changes in some geographical areas as manufacturing shifted to low labor cost Countries. And yet, the Western world ended up better of from this change that was even more impactful since it occurred in a very short time (a decade, versus the 100 years that saw the shift from an agricultural society to an industrial one).

Robots have been around for some years and have clearly impacted many manufacturing processes. Actually, we are seeing in these years a reverse in off-shoring. Whereas till last century it made (economic) sense to move manufacturing where labour cost was lower (thanks to a supply/distribution chain that made the location of the manufacturing plant irrelevant) now the cost of manufacturing with robots is the same be it in the Far East Asia or in downtown Detroit. Hence, companies are starting to move back the production.

With industry 4.0, dense robotisation and increased softwarisation and customisation of products I expect manufacturing to become more and more distributed. That will likely create new (types of) jobs as well as decrease (not too much to decrease anymore...) pure manufacturing blue collar jobs.

However, and here is the thorn for many of the people in ICT, robots will learn to program, to design, to write articles, even to invent new areas of mathematics. We are already seeing the first signs of this. And this is what creates concern. Now the robots seem to be on a path of substituting us in what are real "human" activities.

My bet, and I did not change my opinion after having heard the other panelists, is that we will continue to see changes, as the world shrinks and more people come to the production world, and as technology enables more and more people to be productive. Think of the millions of apps that the evolution of technology has made possibile by enabling a workforce that was totally outside of the production processes. Now a 15 years old boy can develop, market, distribute and sell the apps he has designed in a dorm.

I don't believe in a JLS for the very reason that jobs are a way of life, animals included. Jobs relate to producing wealth and make clear to the Society that you have a role in it. Jobs are about responsibility as a citizen, for today's community and for our children. These basic characteristics of jobs will remain unchanged. The actual tasks performed by jobs, on the other hand, will keep changing.

These changes will create pain and suffering in some areas and in some types of people (not because of them, but because of evolution, there but for fortune are you you or I). Out of these hurdles we will see new types of job to emerge.

Overall, the arrow of time has shown a progress in our social life, in the well being of people. In spite of the daily news that might seem to show a different story, of intolerance, violence and destruction, the overall picture keeps getting better.

There is all reason to be optimist, and optimisms that is not hiding nor denying the many big issues facing us on this small globe, but that is rooted in the past progress and that can leverage on new tools. Technology being one of them.