A few numbers to think about 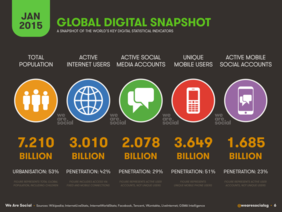 Look at some figures and think about them. Credit: We are social

Statistic data on the use of internet at the end of 2015 are out. The march towards a connected world keeps moving on with over 3 billion people on line (or at least with the opportunity of being on line) and 4 billion people that are not. Still we are getting closer to the tipping point when more world people will be on line, surely before the end of this decade and possibly already this year (although I am skeptical it will happen so soon).

We have Countries with a almost ubiquitous internet penetration (Canada leads the list of big Countries with a 93% penetration, Iceland tops them all with 98.9% penetration) although others are lagging behind (the lowest penetration is in Myanmar, North Korea and South Sudan where 99.9% of people do not have access to Internet). China has reached 47% of Internet penetration but it is, in volume, the largest presence with over 600 million people connected. 37% of connected Chinese used Internet for e-commerce in December 2015 against 67% of British (top of the list), but again the sheer population number in China makes Chinese the highest e-commerce users on the web.

The African continent and the South Asia are the areas with fewer Internet connections. However, there are signs of evolution and the scenario may change significantly by the end of this decade. Particularly in Africa we are seeing initiatives to drop Internet from the sky and we are also seeing a growing interest to innovation and to generate innovation through start ups.

In spite of the difference in connection speed on mobile in various parts of the world (averaging 18.2Mbps in South Korea, best in class and double speed of the second, Singapore with 9.1Mbps, down to Vietnam with 1.1Mbps) the volume of data downloaded has reached (average) 900MB per month, meaning that every month we are approaching 3 EB (3 billion GB) of data traffic on mobile.