A cosmic ray detector in your hand ... 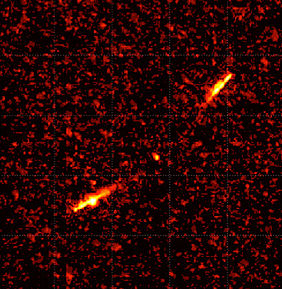 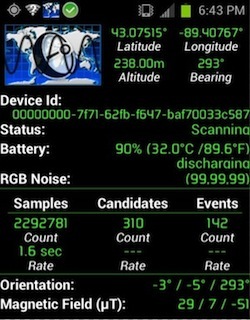 A screen capture of the DECO app in action displays data, including the number of cosmic events recorded. Credit: Justin Vandenbroucke

Who would have predicted twenty years ago, or just 5 years ago, that today we can use our cell phone to detect cosmic rays?

Scientists have been studying cosmic rays for several decades using quite sophisticated machinery that both in cost and size are beyond reach of anyone of us.

But now, physicists at the University of Wisconsin-Madison have created an App that can run on your smartphone (only Android so far but an IOs one is planned) and can detect cosmic rays.

Cosmic rays are made of muons and muons can be captured by the digital sensors of your cell phone camera. When you take a photo the number of photons that hit the sensors is so large that muons just are not seen. However, muons can easily go through hard objects whilst photons do not (unless that object is transparent).

Leveraging on this the physicists at Madison University have developed an App that can measure the muons reading the sensor when it is covered, e.g. by placing a black tape on the lens of the smart phone camera. Muons go through and over several seconds a significant quantity can be detected, enough to detect them.

AS shown in the two figures you get both a graphical representation, actually the "photo" of muons, and an analyses of the cosmic rays detected.

You can leave your cellphone in a drawer, muons will manage to go through it, after having activated the App or you can point your cell phone to a specific area n the sky.

Detecting muons in this way is clearly not as accurate as by using a detector costing hid reds of thousands of dollars and weighting a few tons but it still works. And assuming you have thousands of people taking muons photons the data harvested could well support a statistical analyses resulting in a quite accurate measurement.

What amazes me most, however, is the incredible versatility of our smartphones, beyond the wildest imagination.