A brain for your digital camera... 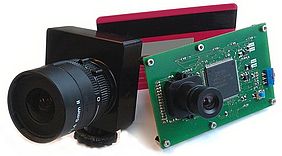 IBM has released a few months ago is best neuromorphic chip (so far) as part of its quest for brain like computation power. The chip, TrueNorth, contains the equivalent of one million neurones and can perform up to 46 billion synaptic operations per second using just 70mW of power. This was a good step forward in the path to create an artificial structure with the processing power of a human brain at a comparable energy level. With current technology it would take 96 racks of the Blue Gene supercomputer to simulate 100 trillion synapses and that would require a power of 12GW. Compare this with the power consumption of our brain (around 20W) and you see that the difference in efficiency is in the order of 500,000,000 times in favour of our brain. TrueNorth, if scaled to the power of a brain (which is not easy to do!) would consume 152W, that is 7.5 times more than a real brain.

Now Samsung has announced the use of TrueNorth to create a digital eye that can see in real time.

In association with TrueNorth the Samsung digital camera can process images at 2,000 frames per second to detect movements at single pixel level with  a power budget of 300mW (on top of the TrueNorth power needs there is the power consumption of the digital sensor plus some other required component).