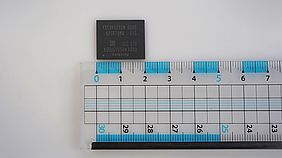 The new Samsung 512GB SSD chip would add just 1 g to your cellphone (actually it will make it lighter since it can replace its lower capacity and heavier current memory...). Credit: Samsung

SSDs are a bit more complex than compact flash. In addition to the storage part (512 GB in this case) they have a controller and an additional memory (4GB of DDR4 - Double Data Rate fourth- generation synchronous dynamic random-access memory- in this case).

If you do the math, the evolution has been even faster than what predicted by the Moore's law.

The Samsung chip is 20x16 mm in size (one hundredth of a normal 2.5" SSD) and weights about one gram (by comparison a US dime weights 2.3 grams). In terms of speed the new chip is some 1,500 times faster than a hard drive.

The chip uses the 48 layer architecture (it is a 3D chip with 48 layers of "transistors" stacked one on the other) and 20nm etching technology for the controller part.

Being so small and so light it provides a lot of flexibility to engineering the future generation of smart phones and tablets (and lap top computers).

We are perfectly on track to get 1TB+ smartphones by the end of this decade and to leverage this huge storage to support "fog" (the "Cloud" at the edges of the network) and to create the 5G.